The Best-Kept Secret in AM? A Heavily Validated ICME Simulation Tool Goes Mainstream.

The Best-Kept Secret in AM? A Heavily Validated ICME Simulation Tool Goes Mainstream.

Perhaps the holy grail of all manufacturing is, at its heart, the simplest: understanding!

Simulation software ostensibly enables designers to virtually verify that a ‘build’will work before any fabrication process begins. However, the levels of complexity and widening array of available process and material combinations, alongside demanding end-use environments, mean that most solutions familiar to the market simply cannot deliver all the answers needed.

Since its beginnings in 1989, AlphaSTAR has established itself as a physics-based,Integrated Computational and Materials Engineering (ICME) technology leader in simulation solutions. The team is grounded in real-life scenarios that impact highly-regulated and extremely demanding industries from aerospace and automotive to defense and energy offering the simulation software tousersthat can rely on it to reduce material waste and time-to-market– all founded on a deep understanding of the underlying physics and materials science.

One of AlphaSTAR’s earliest demonstrated AM simulation success stories involved emergency assistance for the fabrication of the world’s first 3D printed car.  Local Motors, Oak Ridge National Laboratory, and Cincinnati Incorporated came together in the autumn of 2014 to build the Strati vehicle using the Big Area Additive Manufacturing (BAAM) platform for the 2015 North American Auto Show. The project was plagued by delamination, voids, warpage, distortion, and anisotropy. AlphaSTAR was asked to help. The GENOA3DP software, still in its infancy, was able to simulate the FFF process, develop and validate an as-built material model, understand build sensitivities, predict build outcomes, and optimize parameters values to eliminate defects and the effect of defects. GENOA 3DPgave the team confidence to conduct a live build at the show; and,significantly, AlphaSTAR and ORNL werejointly given an R&D 100 award in recognition of their contribution to the emerging use of simulation technology with additive manufacturing.

This story has been repeated with all of AlphaSTAR’s customers. With more than 30 years of experience, AlphaSTAR is bringing deep physics to additive manufacturing modeling and multi-scale progressive failure analysis (MS-PFA) prediction into the assessment of material properties and the quality of AM as-built parts with its primary AM product, GENOA 3DP.

As the additive manufacturing market continues to evolve and mature, more companies are exploring the seven different 3D printing technologies (modalities) in this ecosystem. Layer-by-layer manufacturing adds new avenues of potential failure. During the print process, constituent materials endure temperatures and conditions that change their properties.In these circumstances, homogenized material models are inappropriate and ineffective. Understanding the physics at play in layer-by-layer building – whatever the method – and how materials integrate and adjust and are damaged in the build process is a vital part of simulation.

It’s not the full story, though, as understanding the as-built part with its inherent flaws will then be put into a real-world working environment. True end-to-end simulation goes beyond the 3D printing process itself and can be applied to loads, environments, physical use cycles, and the degradation inherent in performance. That level of simulation is needed to properly understand and predict full lifecycle performance.

GENOA 3DP is an award-winning additive manufacturing design tool and software suite that simulates the 3D printing process to accurately predict the net shape, residual stress, deformation, damage initiation, and propagation associated with as-built 3D printed parts. More significantly, it’s a part of a full ICME tool set that addresses material characterization and as-built part performance. Further, it is part of an end-to-end digital chain that connects the designer, fabricator, and end-user with unprecedented capabilities for parametric evaluation and modification in support of the digital thread.

In short: GENOA 3DP was uniquely designed to fit every simulation need, not just some of them. A part’s job isn’t done when its manufacturing is completed – and neither is GENOA 3DP’s.

It’s a given that simulation technology and mass production via additive manufacturing will intersect. But when and how, and to what extent, remains to be seen. Creating a stronger feedback loop at the get-go enables designers to conceive of the full digital thread of their designs, as well as looping in fabricators, installers, and those eventually performing maintenance. In too many cases today, these groups don’t communicate; now with an established feedback chain, everyone can understand the ins and outs of not just designs but issues, loads, and longevity.

With a building block approach to sustainability, end-to-end understanding emerges. The bottom, middle, and top levels, as well as their total incorporation into the finished part, see data evaluated and validated at every step – virtually.

Built upon NASA standards and seven qualified process steps, our approach to simulation is both thorough and validated. It also takes away the guesswork and eliminates the risk of the “what if” when it comes to a physical final product, as this has already been established before a single layer is printed. 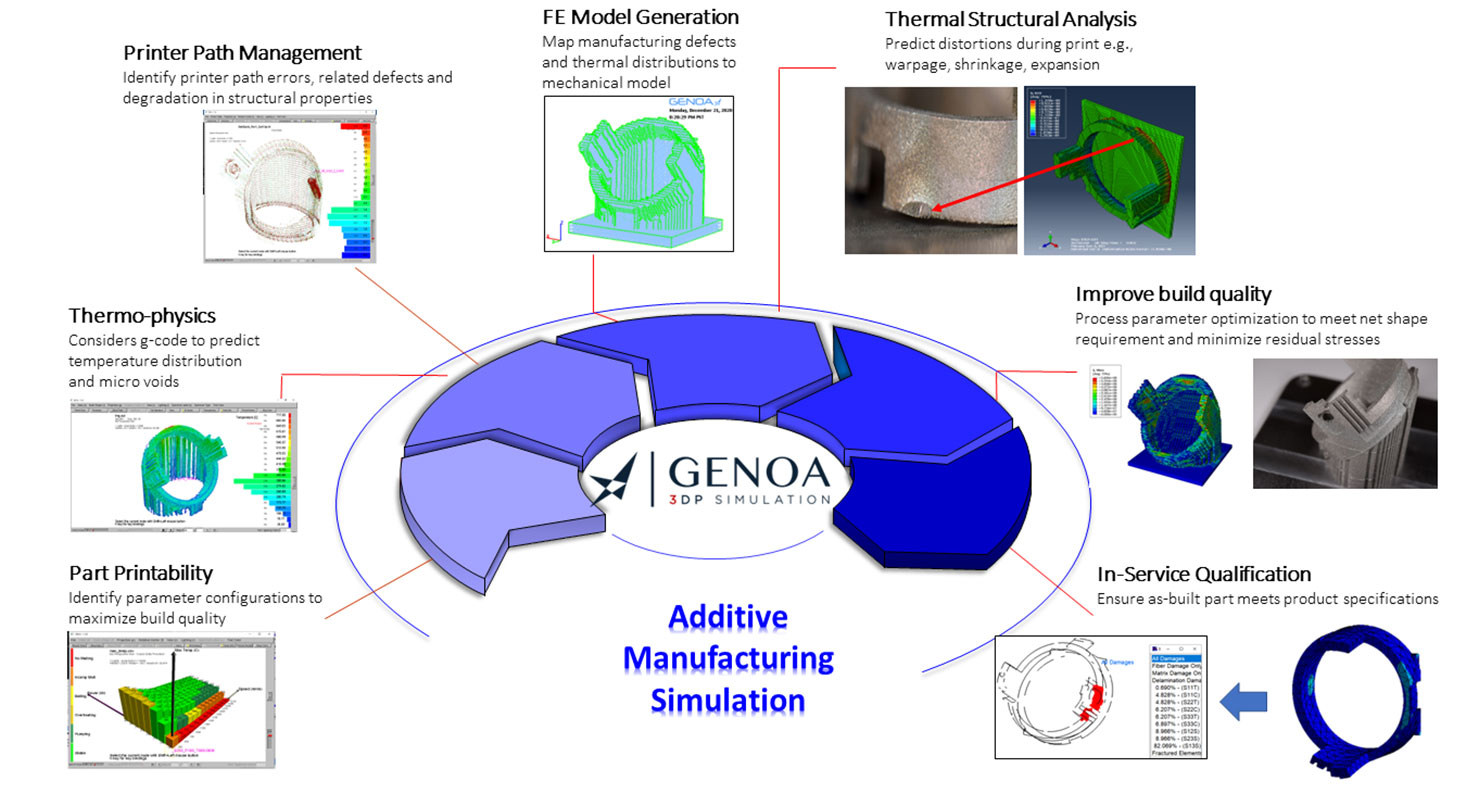 We’ve had the best-kept secret in AM used in-house and backed with decades of customer successes. Now it’s time to let the secret out.